Chris O'Hara: From the US to the EU

Since he was young, Chris had wanted to work with robots.

“I wanted to make robots that can do things humans can’t - or go where it’s dangerous for humans,” says Chris from his apartment in Eindhoven, The Netherlands, where he is pursuing a professional doctorate in Software Technology.

Originally from Los Angeles, California, Chris is one of the few Americans who have taken the big step across the Atlantic to be part of the EIT Digital ecosystem. 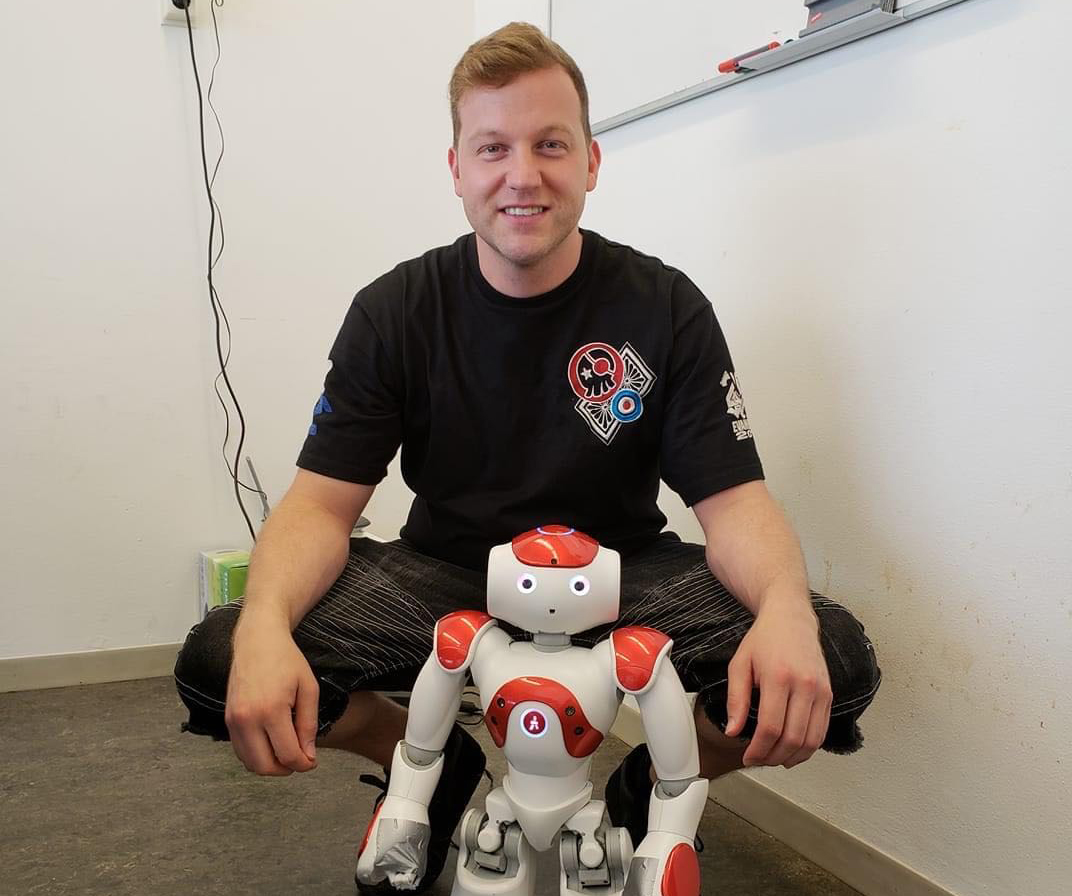 Chris with Nao, the humanoid robot

It has taken Chris O’Hara much effort and several detours, but he was finally in an environment he feels most comfortable, doing the things he truly loves. Chris has a story to tell, and we sat down to uncover it.

Growing up in the US

As an orphan, Chris didn’t exactly have what one would call a ‘normal’ upbringing.

“After the age of 14 I pretty much had to raise myself,” he explains. “My friends could take part in after school activities, but I had to stick to the bus schedule. I ended up moving around a lot, living with different friends.”

“It didn’t end after I finished school. I had to find a place to live and learn to rely on myself. But I thought to myself: ‘Compared to my younger years, this is easy.”

“At first it was a setback, but then it became an ability to persist. That’s how I became confident that if I wanted to do something, I could. I became my own greatest ally.”

In search of knowledge

As an undergraduate, Chris had an interdisciplinary major in the fields of science, technology and society at the California State Polytechnic University in Pomona. “I was interested in hardware and software, but also in non-technical things: cognition, behaviour, learning.”

Upon graduation, he wanted to further his studies, but it wasn’t so easy. “It’s not so normal to do a postgraduate in the US,” Chris explains. “Education is expensive. I felt it would be much easier to study in Europe, and that there would be more opportunities for quality networking.”

Seeking those opportunities and with a thirst for knowledge, Chris decided to explore e-learning courses. “It was 2017, and I had no idea which platform to use, so I tried them all.”

One of those platforms is Coursera, where EIT Digital offers at least 30 courses on a range of topics from Cybersecurity Awareness and Innovation to Blockchain for the Decision Maker.

Some of the online courses offered by EIT Digital on Coursera

Chris ended up taking two EIT Digital courses: one on embedded systems and another on the Internet of Things (IoT), along with more than 100 other courses on Coursera.

On the motivation to complete all those online courses, Chris explains, “I felt very behind the global average - I thought this might be able to help me catch up. You have to want it. You have to have interest and resilience.”

The start of an adventure

Upon completing the two courses, Chris was contacted by EIT Digital. “I found out I had earned 30 ECTs for those courses. I had basically completed the first semester of education remotely from the US, and was invited to do the rest in Europe.”

“It seemed appealing because in the US, depending on the university, robotics is part of different departments, so the theories tend to follow that field’s perspectives. TU/e (Eindhoven) offers an entire master’s in embedded systems, so I was very interested.”

That’s how Chris’ adventures with EIT Digital began. With his interest in robotics firmly in mind, he wanted to take an unconventional combination of courses: Embedded Systems in Eindhoven for the first year, and Autonomous Systems in Berlin for the second. 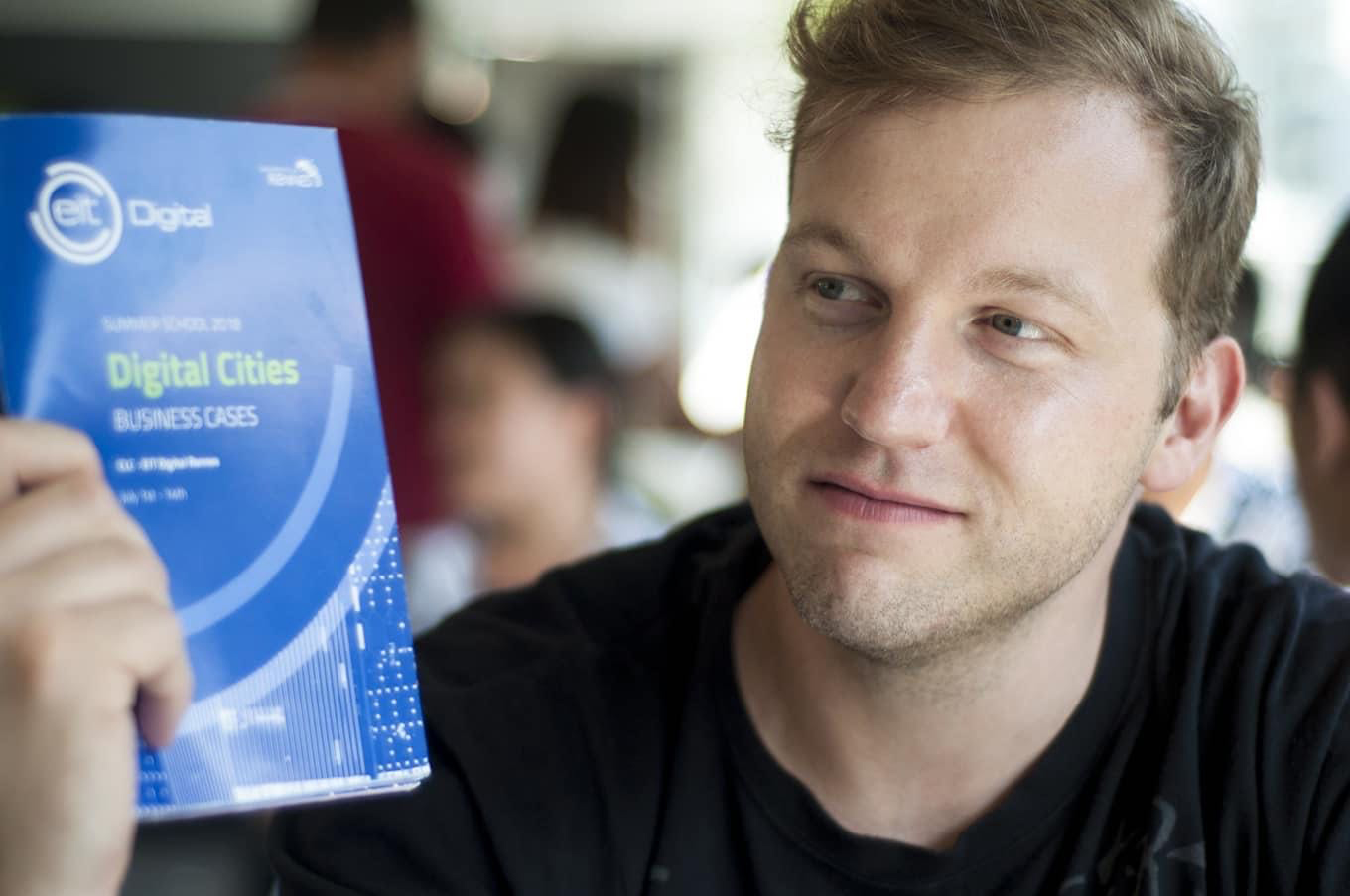 “Turns out it’s not so easy to do that. I got a lot of rejection. ‘We don’t have a form for this,’ they would say. But I persisted, and the researchers loved my determination. They made some calls, they helped me, and finally I got what I wanted.”

As it happens, TU/e had more to offer Chris. “I originally wanted to work at NASA, but they felt I didn’t have enough of a background. With TU/e, I’m now working for the European Space Agency on artificial intelligence for the space station.”

Persistence, however, is not Chris’ only defining trait. A thirst for knowledge also contributes to his academic and career choices.

“I am a person who likes to learn about a lot of different things. I have a purely intrinsic curiosity - I want to learn how everything in the world works,” he says. “I want to take a problem statement and be able to apply multiple perspectives to it.” 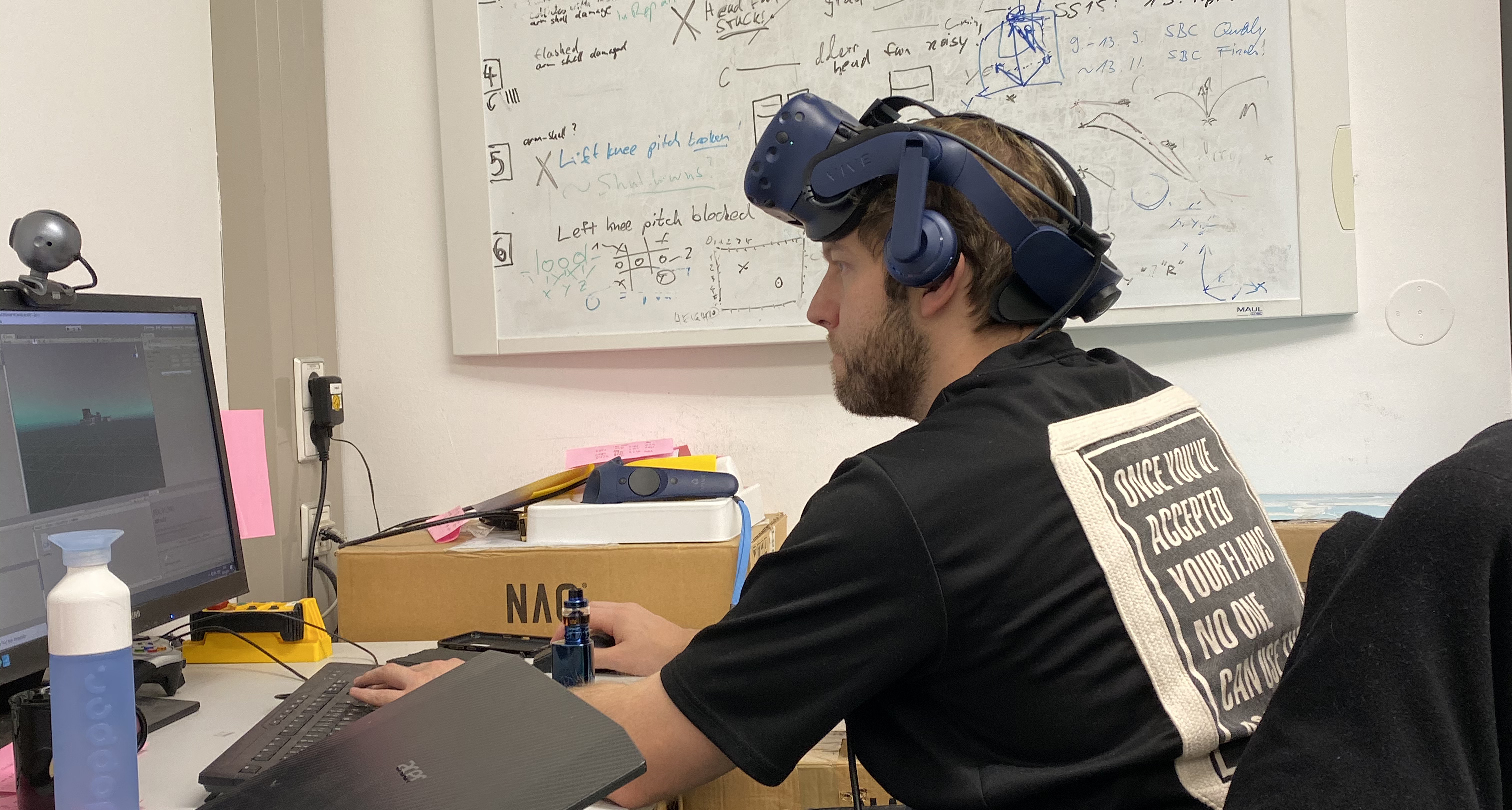 Chris believes that humanity is moving out of the era of specialisation.

“We’re gonna move away from Fordism, Taylorism - it made us very good at solving specific problems, but now we need broader people. Being too specialised is not necessarily good.”

Explaining how he came to such a conclusion, Chris continued, “I was once in a conversation on developing space suits, and the discussion centred around functional requirements. But if you meet all of those requirements, you ignore the spaceman entirely.”

“There was no insight on how astronauts behave. Would it be dangerous for them? Turns out, ergonomics and human factors are very important.”

After his first year in Eindhoven, Chris attended an EIT Digital summer school in Rennes and travelled around western Europe, participating in astronaut training in Austria and taking part in an EPFL space programme in Lausanne. 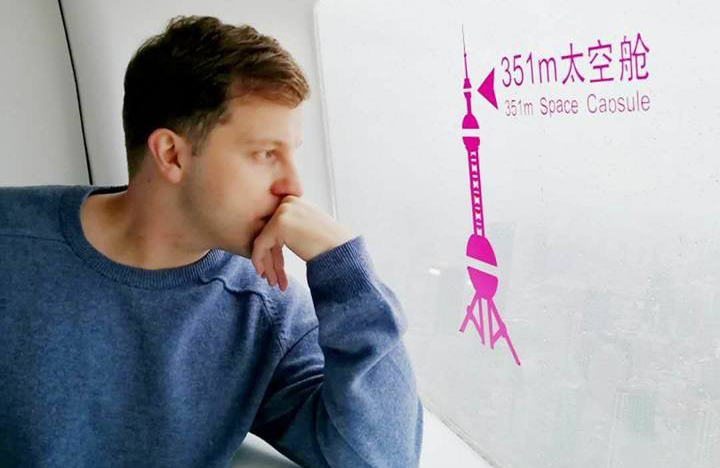 With all that moving around, does he ever find himself missing home?

“I miss Los Angeles for its food,” he admits. “Fresh local avocado, walnuts, almonds, sushi. I also miss things being always open. In LA I can go to the gym at 2am and the supermarket at 4am. Here shops are sometimes closed while the sun is still shining. I find that weird.”

“But don’t let such things stop you. Developing my knowledge and network in the EU has taught me a lot. I encourage anyone that wants to transform their life to leave their homes to go abroad. You won't be the same person when you come back!”

Chris is currently a professional doctoral candidate in computer science and software technology at the Eindhoven University of Technology (TU/e). Upon graduation, he plans on moving to Tokyo to pursue a second PhD in astronautics.

Meet our Alumni Board

The EIT Digital Alumni Foundation established a new board this summer. The first mission of the new board members is to restore the…

Let's go through the highlights of Annual Meeting 2021 together! We had networking, fun and were just happy to be all together again…